“A day will come when cannon will be exhibited in museums, just as instruments of torture and people will be astonished that such a thing could have been existed” ~Victor Hugo

With a dream of days when peace prevails throughout the world, and memories of war shall only be left…..

The proposed War Museum next to India gate Prince Park is a historic and prestigious project and a tribute to all soldiers for their bravery in various wars for the country.

The design demonstrates and showcases the wars India has fought, ancient to contemporary. The galleries and exhibition spaces in it shall display time line of wars where in visitors shall experience and learn about history of Indian wars chronologically.

The basis for the design of museum has been the five elements of universe (pancha bhootha), five senses of humans and bravery of more than 25,000 soldiers who won wars & many of them lost their life during wars.

Design incorporates a Golden ratio connecting India gate, centerline to the Museum on northern side of Hexagonal round-about. It also intersects Central axis line connecting important landmarks of Delhi (as illustrated in sheet # 3). An underground walkway connects the War Memorial to the Museum at an angle of 19º 47’ (1947) towards North-East of India Gate. The hexagonal geometry has been taken as a module and integrated in the design, thus placing the Museum in Historic Site context of Delhi. Proposed museum bonds with immediate surroundings and urban fabric just like plenty full-grown trees rooted in ground existing in the given site.

The proposed museum flows with the existing landscape in carving out museum spaces. Innovative public spaces have been conceived so that visitors could move freely and appreciate the works of art and leisure depicting war and its consequences. Visitors would be able to experience a new way of visiting a museum. The length of museum has been taken as 25,000mm (250 m) and number of voids in museum shall be 25,000 depicting the same number of soldiers who lost their life while combating for the nation.

Throughout the length of Gallery, visitors shall experience the number of days on battlefield, as number of entities and museum roof with different levels shall demonstrate time line of wars.

The proposed museum shall be covered by a perforated skin that would add volume to the building and create a space between interior and exterior protected from the elements. The skin’s transparency offers a changeable image of the building, according to the hour of the day and the light quality. Space transition through user experience emanates a dialogue inside out, showing history of wars in foreground and history of place in the backdrop. The building gets an increased urban visibility due to its outer skin and at night it will be a real art lighthouse. 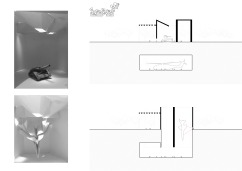 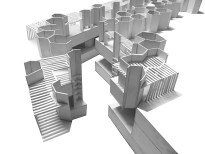